Eye of the Storm

The La Tienda Exhibit Space is pleased to present

Opening Reception: Saturday, June 25 from to 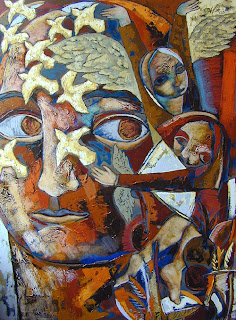 Pablo Perea was born and raised in . Since coming to the States he has led public mural projects, and recently has been awarded the People's Choice Award at the Chicago Latino Film Festival for "The First and Only Lesson," a short film he wrote, directed, and produced. As a painter Pablo has created thousands of paintings of the same woman, who he describes as his inner female self. 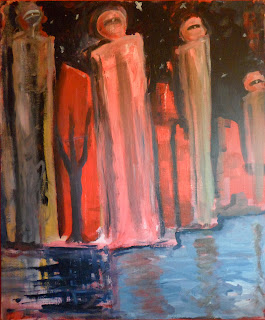 Sean Healen is well known as a musician, with a repertoire of songs that yank at the heart strings of everyone who hears them. His CD, "Floodplain," was awarded Best Rock CD at the 2009 New Mexico Music Awards. Just this month he was featured in the Santa Fean Magazine. Sean's paintings are likened to the soulful and intensely inspired work of Edvard Munch. Like his songs they bring to the surface deep dark personal feelings of entangled emotions. Sean will play songs from his latest CD, which was produced by Malcolm Burn who is renowned for his work with Bob Dylan, Emmylou Harris, and Patti Smith. 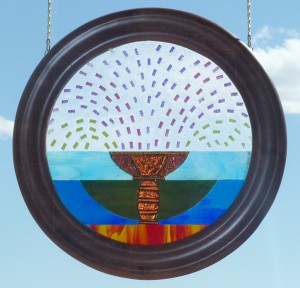 Mike Grabarek is a glass artist who fuses ancient wisdom and divine symbolism into his vibrant glass creations. While his colorful glasswork reflects, and refracts physical light, his designs illuminate and express spiritual and meditative ideals. Mike's works are also functional and decorative and add beauty and luminescence wherever they are displayed. 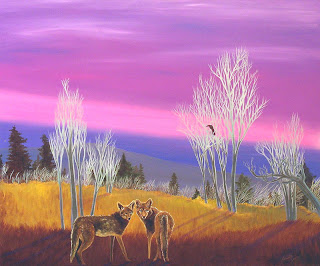 Linda Storm's creations include miniature wearable oil paintings and larger mixed media wall art. She specializes in symbolic, spiritual, mythological, and surreal interpretations of the natural world. The raven is an iconic image in many of her paintings. Her work has twice graced the cover of the NM Bar Bulletin, was the cover of The Sun Monthly, and was featured in New Mexico Magazine. Linda's paintings have been purchased by well-known local collectors as well as collectors from around the , and as far away as and .

Like a hurricane surrounded by the creative vigor of her friends, Linda Storm, has pulled them all together for Eye of the Storm.
Posted by Destiny Allison at 12:37 PM 1 comment: